Greenway trails consistently rank high on the list of amenities that the public would like to see to enhance mobility options. In 2007, the Town of Huntersville adopted a “Greenway and Bikeway Master Plan.” This plan included an overview of greenways, trails and bikeways, an inventory and analysis of these facilities, as well as an action plan and implementation strategies. The greenway and bikeway routes are classified by two tiers of importance to help develop a capital improvement plan for the most critical pieces of the network (Map T-3).

A planned extension of the Torrence Creek Greenway, west to Beatties Ford Road and east to Rosedale Village, is planned for completion in the fall of 2011. Map T-4 shows existing and planned public Greenway trails located within the Town. 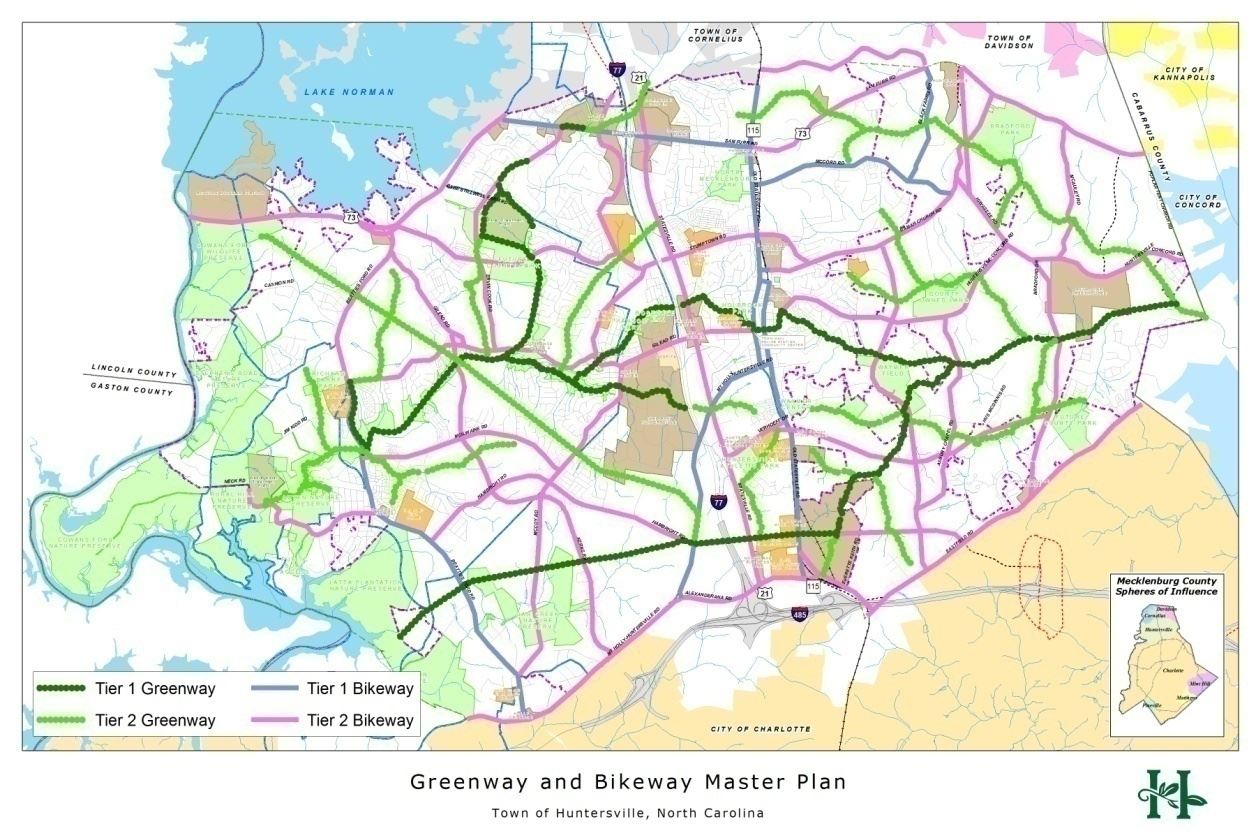 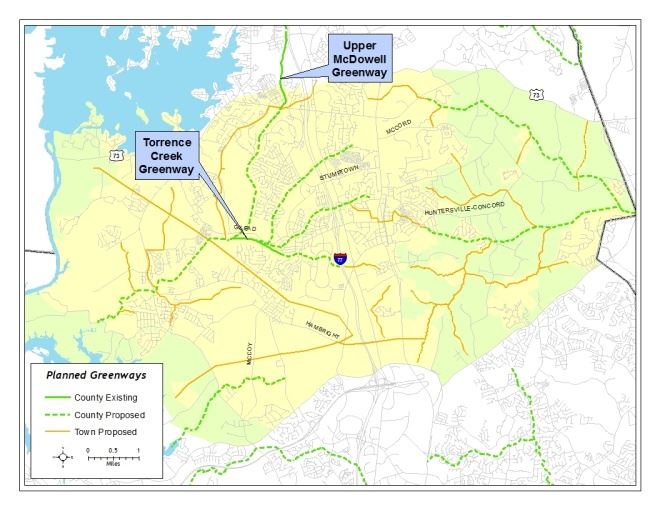 For new development, reservation, dedication or construction of greenway trails is required by the Town’s land use regulations. The latter option (i.e. construction) may be needed to meet the “Urban Open Space,” or “Open Space” requirements for a particular development proposal.

The Carolina Thread Trail (CTT), also known as The Thread, is a regional trail network that will ultimately reach 15 counties and more than 2.3 million people. More than a hiking trail, more than a bike path, The Thread preserves our natural areas and is a place for exploration of nature, culture, science and history, for family adventures and celebrations of friendship.

The Thread arose from a discovery process started in 2005 when the Foundation For the Carolinas convened more than 40 regional leaders and organizations to determine the region’s most pressing environmental needs and concerns. From that process, open space preservation surfaced as the number one priority. The Carolina Thread Trail was successfully launched in 2007 as a project focused on preserving natural corridors and connecting people to nature through a network of connected trails.

Under the leadership of Catawba Lands Conservancy and many local partners, the Carolina Thread Trail strengthens the region and promotes economic development, education, better health and land conservation by connecting people, businesses and communities of diverse backgrounds and interests.

While not every local trail will be part of the Carolina Thread Trail system, The Thread is linking regionally significant trails and many regional attractions. Think of it as a “green interstate system” of major trails and conservation lands created through local efforts throughout the region. The Thread will emerge over time as communities work together to plan and build trails reflecting community character, aspirations and priorities.

Map T-5 depicts The Thread Trail, including the portion to be located in Huntersville. In several locations, the CTT overlays either designated county or town greenway trails. Citizen Survey: 91% of survey respondents either agreed or strongly agreed with the statement that the town should “Combine sidewalks, bike lanes and greenways where appropriate for efficiency.” 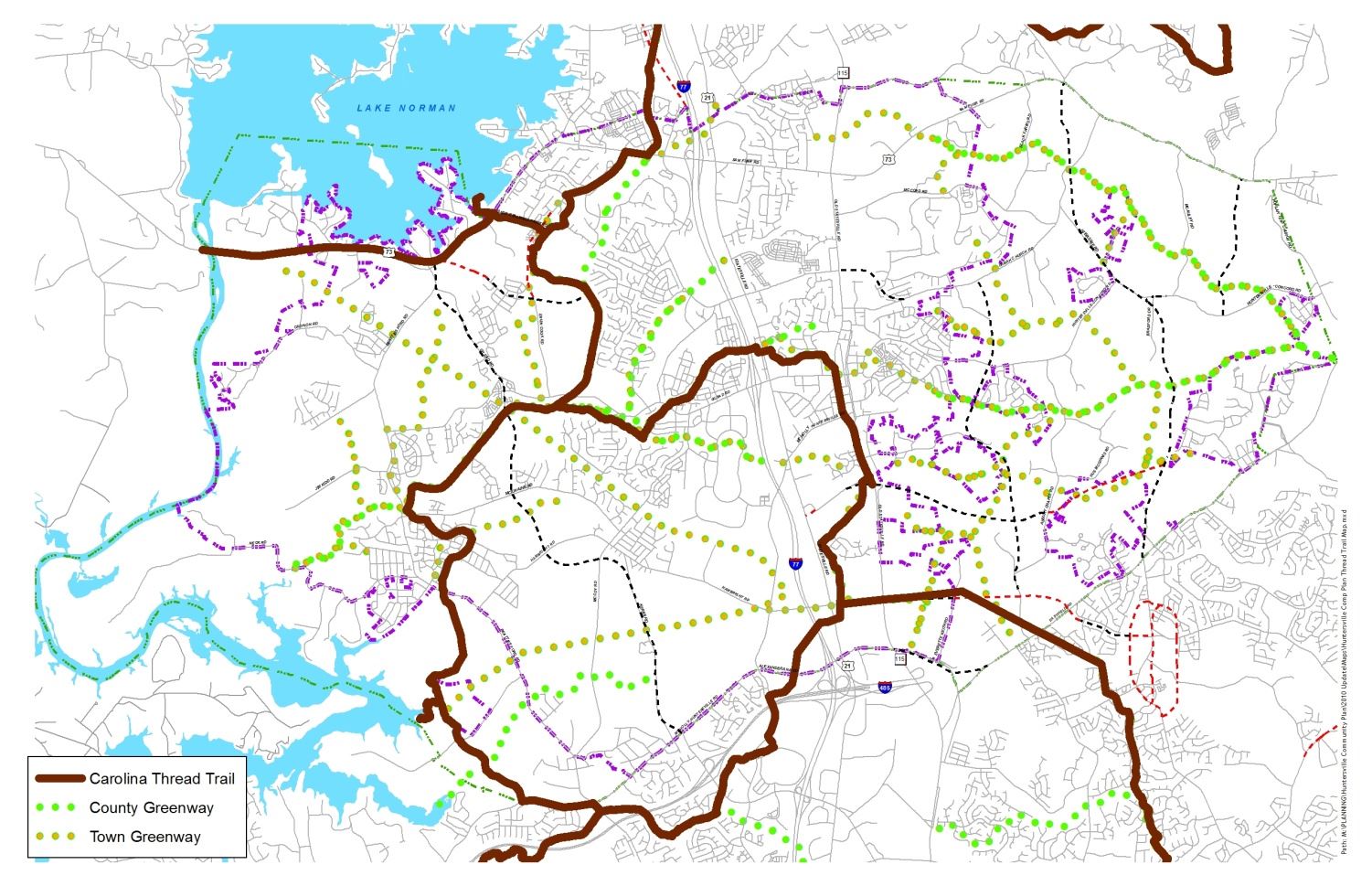